Pretend to be a Time Traveler Day 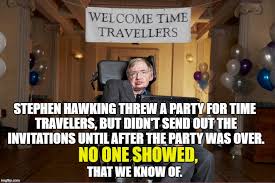 Pretend to be a Time Traveler Day on December 8th encourages us step from our Tardis or flip open our Omni while wearing clothes from the past. At the same time, we should act appropriately confused by certain technology.

Time travel has captured our imaginations for generations. Science and authors keep coming back to the topic again and again, so it should be no surprise there would be a day to pretend to be a time traveler.

The original blog post that got the day rolling can be found here.  For more resources on how to be a time traveler or at least act like one, we can explore the wide array of television and movies produced over the decades.

For example, Doctor Who has been on television for more than 50 years. Some might say that might be plenty of resource material right there. Let’s not stop, though. We’ve made a list and some of them might surprise you.

A Wrinkle in Time by Madeleine L’Engle
The Time Machine by H.G. Wells
The Magic Treehouse series by Mary Pope Osborne
The Time Traveler’s Wife by Audrey Niffenegger
A Connecticut Yankee in King Arthur’s Court by Mark Twain
The Restaurant at the End of the Universe by Douglas Adams

Act like a time traveler.  Choose your time period and decide whether you are traveling to the past or the future. Be overly shocked when someone says, “I’d kill for a double mocha latte right now,” or “That car is the bomb.”  Misuse technology. When someone offers you earbuds to listen to a new song, sniff them to see if they smell good.  Use #PretendToBeATimeTraveler to share on social media.

PRETEND TO BE A TIME TRAVELER DAY HISTORY

This time-traveling observance began in 2007.